What I Learned From My Father 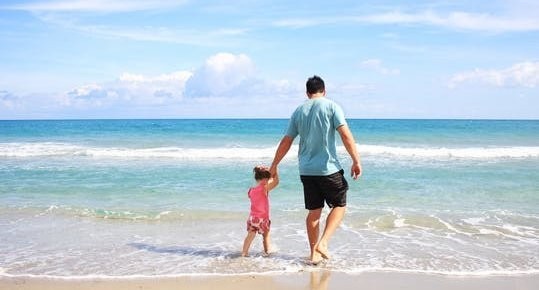 (One day late, my apologies, but, a message I like to send every year.)

"Don't worry that children never listen to you; worry that they are always watching you."

With Father's Day rapidly approaching my thoughts have naturally gravitated to my father. My dad passed away a few years ago but he left a lasting impression on me, my children, and 40 years of students he taught and coached at South Kingstown High School.

He was a throwback. He came from what I envision was a kinder, gentler and far more civilized time. He was a Depression-era kid who walked 3 miles in the snow to school – up hill both ways of course - with newspaper stuffed in his shoes to keep his feet warm. He was a Greatest Generation / World War ll veteran who enlisted right after high school because "it was the right thing to do."

In an era where so many of us are so self-absorbed, I always found his attitude to be astonishingly self-less. Our society today has embraced a "me first" attitude with too many people always looking for their 15 minutes of fame or their own reality TV show. We throw around the word "great" too liberally using it on entertainers or athletes or business leaders and others in the limelight. I think we've sometimes confused fame with greatness. My dad was not and never will be famous in that way – but, make no mistake about it - he was a great man.

He was simple without being simplistic. When necessary he would argue without being argumentative. And he was passionate while not being dramatic. Personality traits like; class, integrity, commitment and grace wrapped around him like a comfortable blanket.

I've often thought that he could have been anything he wanted to be. He seemed to have a master's level grasp of business, sports, politics, science, religion and many other subjects. I sense he was probably often the smartest guy in the room, but I doubt he ever felt the need to prove it. He and my mom seemed very content 'not' keeping up with the Joneses, driving the newest cars or dining in the fanciest restaurants. He was always happy with a good Buick, a bologna sandwich or a doughnut.

You probably wouldn't have taken much notice if you saw him walking down the street if you didn't know him. Except maybe seeing him wearing a pair of pants that had a patch or two on them. A clothes hound he was not.

He was versatile. He had a wonderful sense of humor, could tell a good story, draw a beautiful picture and was handy with a hammer and nail, an axe and a saw. If the phrase "comfortable in his own skin" ever fit a man, I think it was my father. He was authentic, real and original, a true one-of-a-kind.

Though he was proud of his achievements, and there were many, I always believed he was far more concerned with his contributions rather than his accomplishments. He had an unswerving moral compass that he believed always pointed out the difference between right and wrong. He was as honest as any person could be. And a true gentleman.

My brothers, sister and I couldn't have been raised by someone like that and not have learned a few lessons along the way. 7 stand out for me.

1. To Hustle. Though you may not be the biggest, fastest or strongest, you can always work hard. That coaches would always take notice of the person who ran on and off the field, dove for the loose ball and simply not quit.

2. How to eat cereal. How you take your spoon and push the cereal at the top of the bowl under the milk so you don't get any dry crunchy pieces stuck in your throat.

4. How it's ok to know and always be ready to tell a few jokes. Even bad ones. As long as you laughed at your own punch line, everything seemed to work out ok.

5. That some things in life are worth fighting for. That Freedom isn't free.

6. To always be a gentleman and always hold a door for a woman.

7. Faith. Not just the basics of going to church every Sunday but more in the quiet graceful way of living that often didn't need words. Having an unshakeable confidence in something bigger than ourselves and our problems, this carried him through everything.

I inherited some of his features and characteristics. Blue eyes, a rapidly receding hairline and the side-to-side as much as going forward somewhat penguin-like shuffling motion others of you refer to as walking. Why I did not get those Popeye-sized forearms, I'll never know. But most importantly to me, I hope that I picked up some of his philosophy of living.

He had no interest in glamour, power, gossip or control. Rather, he focused his efforts on the fundamentals of decency, kindness, responsibility and respect.

I'm incredibly grateful that my kids got more than a little bit of time with him. Sitting with him and allowing him to dispense advice and guidance about many different life issues, far better than I am probably capable of doing.

So, thanks Dad, for everything.

For being built with the 'right stuff.'

Brian Butler is VP Business Development of The Allied Group and author of Find 'Em Get 'Em Keep 'Em and the recently released In Search Of...Customers!

Tweet
How Do You Measure Your Career?
The 5 Fundamentals of Great Customer Service Organ...