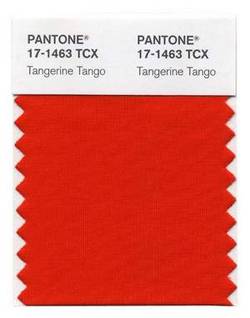 And the winner is ... ORANGE!  Yep, It's going to be a tangerine trees and marmalade skies kind of a year since Pantone picks orange as the top hue for 2012 - and not a moment too soon either.
(See below from 'Today Style'):
- - - - - - -
The world doesn't need more gray, and the blues are covered, too. What consumers need is a jolt - a shot of energy and boldness, all of which comes from Tangerine Tango, the reddish-orange hue that Pantone has announced as its top color for 2012.

"There's the element of encouragementwith orange,  it's building on the ideas of courage and action - it's that we want to move on to better things. I think it would be a disservice to go with a relaxed, soothing color now," said Leatrice Eiseman, executive director of the Pantone Color Institute, the research division of Pantone Inc. which creates color standards every year.

“Sophisticated but at the same time dramatic and seductive, Tangerine Tango is an orange with a lot of depth to it,” said Eiseman,  “It marries the vivaciousness and adrenaline rush of red with the friendliness and warmth of yellow, to form a high-visibility, magnetic hue that emanates heat and energy.”

"Consumer spending is a big player in reviving the economy and it needs adrenaline," said Eiseman. "Orange is a more urgent call to action than last year's hot-pink hue Honeysuckle, which was also supposed to channel cheerfulness coupled with nostalgia.

The annual forecast for 2012's dominant color takes into consideration what Pantone thinks shoppers want and need. Those are influenced by the designer runways, fabric shows, news events, pop culture and consumer habits. "Part of what we do is look at the zeitgeist," Eiseman explained. "We have to look at everything in the world around us. It's not an arbitrary choice."

"Color is really emotion," says Beth Eckerstrom, director of trend and product development at Crate and Barrel. "Everyone thinks it's a physical thing, but it's really emotion."
: - - - - - - - :
So there you have it. Don't forget to consider orange and The Allied Group as you plan your marketing and communication strategies for 2012. I know I'm ready for a little boldness, energy and a move toward warm and brighter things ... how about you?!